Well designed mobile and web apps incorporate platforms such as Google Analytics, Amplitude, Mixpanel and similar services. These services are important tools to achieve one or more tactical objectives:

These objectives are all important, but these data often live in disconnected silos inaccessible to key stakeholders, and may exclude qualitative information that could be used to develop better customer relationships.

Customer and application usage data has many stakeholders: customer service, sales, marketing, data science, and so on. Wouldn’t it be ideal if we could bring together information about how users experience our applications in one data source all these stakeholders could easily access?

The remainder of this article presents an architectural pattern to bring together various data streams relating to mobile applications into a central repository capable of supporting a range of business decisions, with a specific focus on capturing in-app data streams often missed by app analytics platforms.

At the end of the article:

The completed solution will take the shape illustrated in this diagram: 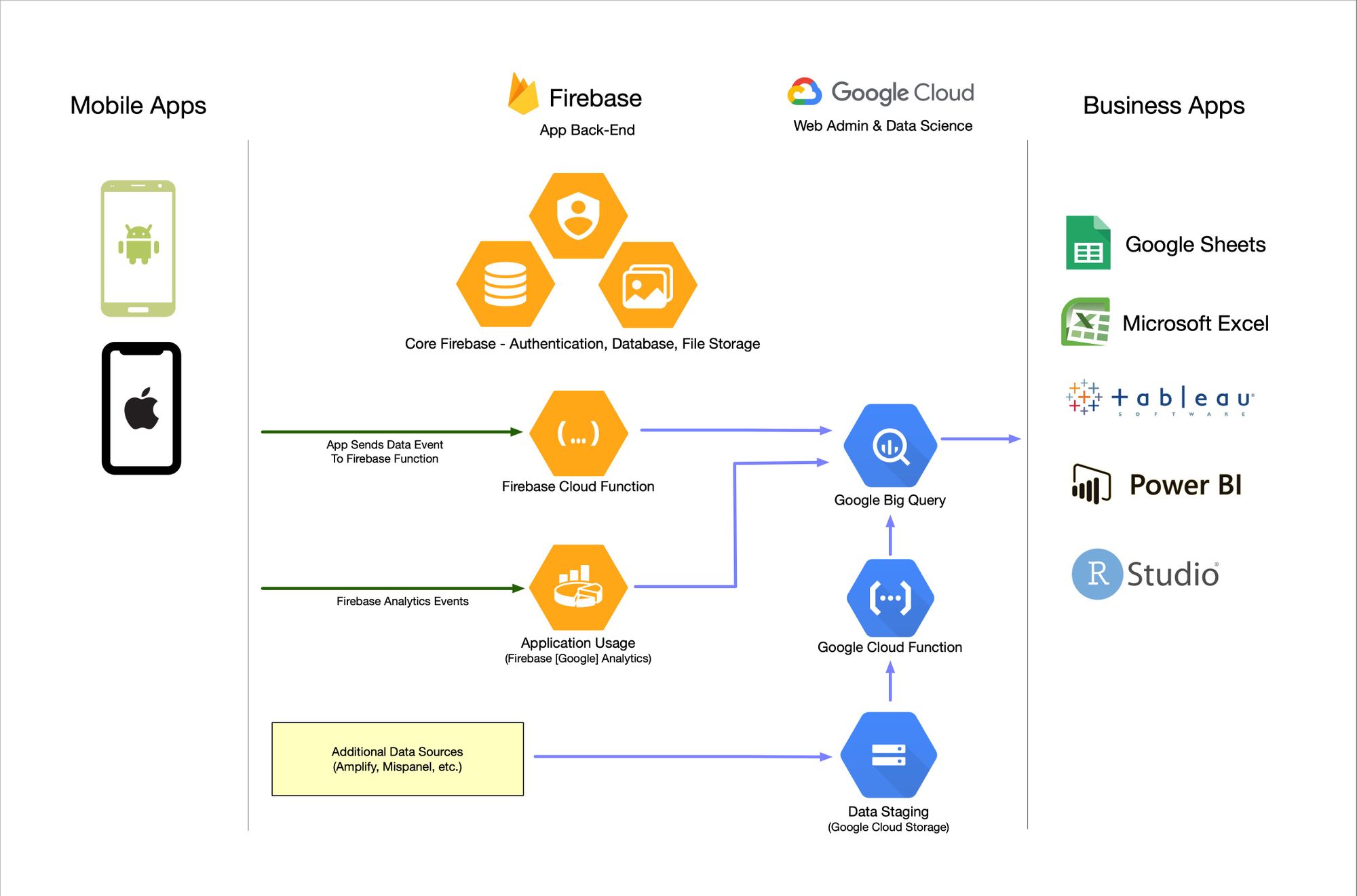 The Pattern is Portable (i.e. AWS and Azure)

While the architecture in this article focuses on using Google Cloud Platform (GCP) to provide the building blocks for the solution, the pattern can be applied with other ecosystems.

In short, if the pattern is a good fit for the scenario, any of the major cloud platforms has the building blocks to assemble this solution.

Actually in this case, we’ll have one unified GCP/Firebase project.

Firebase is basically a mobile/web app developer-friendly skin over GCP. Firebase Cloud Storage, Firebase Cloud Functions and most other Firebase services are GCP resources under the covers. It’s not wrong to think of Firebase as an easier to use “GCP Lite” for mobile developers who need only a narrow slice of everything GCP has to offer. Firebase has a well-earned reputation as having an ultra-low learning curve for mobile developers. But the full range of GCP services is always accessible underneath when it’s needed.

In this solution architecture, we’ll use GCP as the base of the cloud architecture (where Big Query lives), and Firebase as the middle-layer (Authentication, App Data storage). The top layer is the app itself, which connects to Firebase directly, and GCP indirectly. 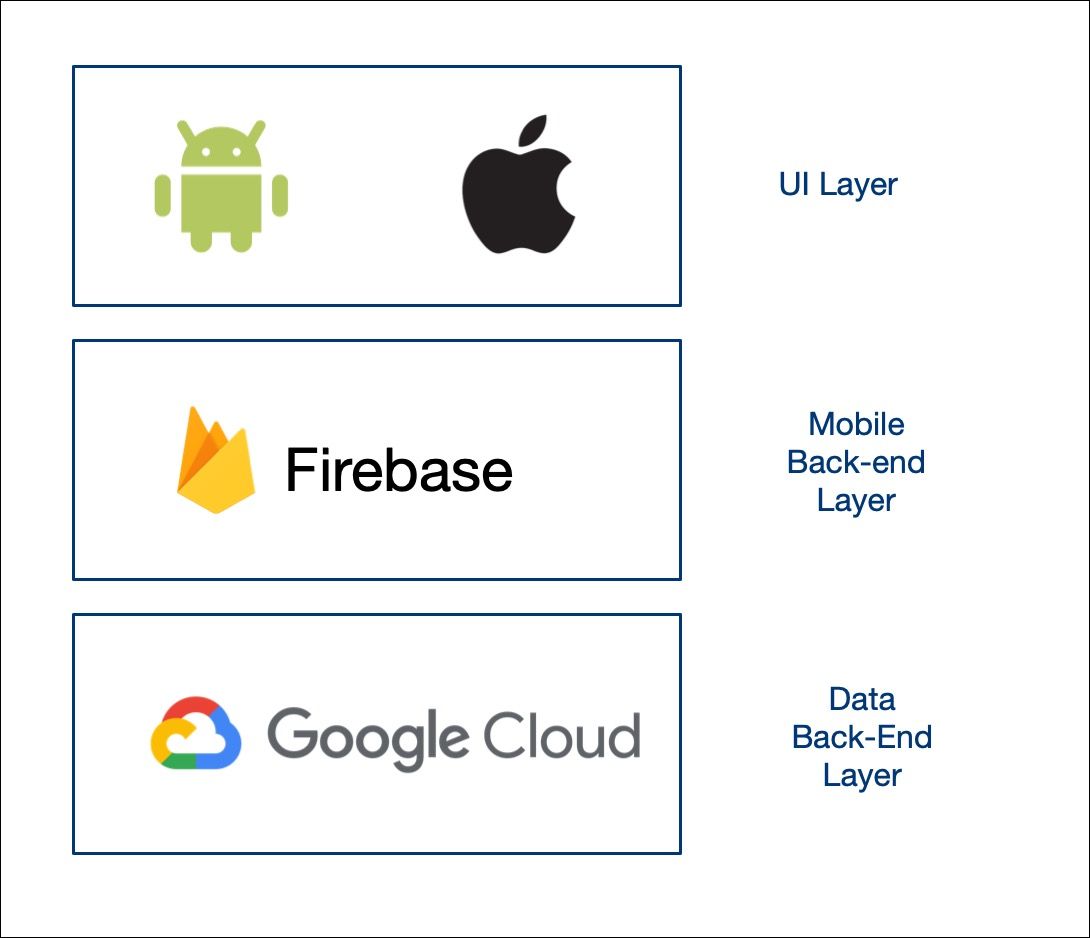 In this article we will create a Firebase Cloud Function to allow mobile apps to send qualitative information directly to the data warehouse (Google Big Query). This function is the glue that ties the mobile front-end to the data analytics backend.

A cloud function is essentially a block of code–a RESTful API call–we can deploy without the need to deploy a server instance for the API to run on. This can have several advantages over conventional API deployment:

Cloud functions are basically “Fee per use” cloud web servers.

The easiest way to build this architecture is to create the GCP project first, and then create the Firebase project–while logged in with the same Google ID.

I won’t go into detail on the process of configuring a mobile (iOS or Android) app to a Firebase project since the Google documentation on this topic is excellent. This architecture builds on mobile apps already setup with Firebase. The Firebase documentation covers this setup better than I could.

At the end of this step, the core platform projects are created, and the front-end applications are linked to the backend.

Google Big Query (BQ) is a completely server-less, highly scalable database technology geared toward SQL-based data analysis. There’s really no setup involved, and it scales itself according to the data added to it.

To support the initial objectives of this architecture, we create a Big Query Data Set containing a single Big Query Table, where the Firebase function will write application events.

We merely need to make a note of the name of the data set and table which we want to write to from the Firebase Cloud Function–and be sure to use the same column names/data types in the cloud function as was defined in the Big Query table.

Note: in this architecture, we’re using Google’s  @google-cloud/bigquery Node.js package  to add events to Big Query. There are multiple ways to add data to Big Query, and the data ingestion costs will be different depending on which technique is used.  Refer to the Big Query Data Ingestion Pricing Documentation to select the most appropriate data ingestion technology for your workload.

Firebase Cloud Functions are authored by creating a local Node.js development environment using the Firebase CLI, and then publishing the function(s) to the Firebase project using the CLI when they’re finished.

This process is quite similar to publishing a Node.js web site to a web server, and most API developers will find the process familiar and straightforward.

The following is a (very simplified!) cloud function that accepts data from a mobile app, and writes the content to Big Query.

Once deployed, the function is available to call via the Firebase API.

App developers need only to add the Firebase Function SDK dependency, and then add code to call the cloud function. The following is an example function call from an iOS application:

As the mobile apps call the Firebase cloud function, data is added to the Google Big Query table in realtime. Users can query that data using SQL from the BQ web console:

Big Query data isn’t limited to access within Google’s own portal tools, however. Many end-user analytical applications support BQ. Follow the links below to read documentation on how to integrate each of these tools with Big Query data.

The above implementation focused on creating the opportunity to stream enriched telemetry from our app code into the data warehouse. This data will typically be additive to clickstream and usage statistics collected by services such as Google Analytics and Amplitude.

Wouldn’t it be great to have that data in the data warehouse also? The answer is situational–but I’d argue the answer is often yes.

Fortunately, the paths to aggregate other data sources into a cloud data warehouse are many, and most desired data sources will have a solution.

Customers spend a tremendous amount of time interacting with mobile applications, and those interactions create business information.  When this insightful information is delivered to business stakeholders in a timely and accessible format–using tools they’re probably already using–they’re empowered to make better decisions and provide better services to customers.

This article presented some possibilities to extend current mobile architectures, and integrate them with strategic data platform investments.  These ideas are applicable to each of the leading cloud infrastructure platforms (AWS, Azure, GCP), and can be implemented cost-effectively.